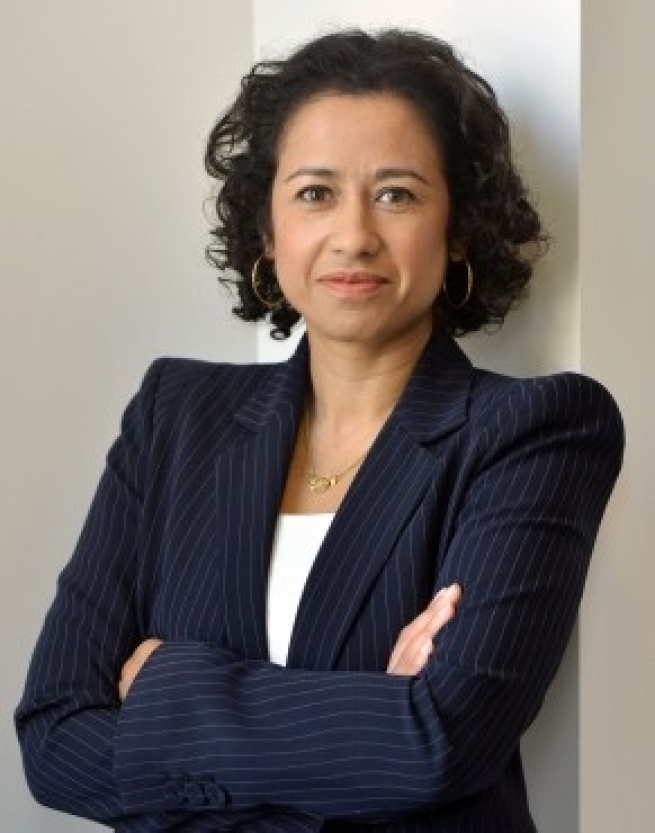 Samira Ahmed is a multi award winning journalist and broadcaster and a visiting professor of Journalism at Kingston University with a special focus on culture, politics and social change. She won Audio Broadcaster of the Year at the 2020 British Press Guild Awards for her work as a presenter of Front Row on Radio 4 and her Podcast How I Found My Voice.

Samira also presents the weekly programme Newswatch on BBC One. She presented the three part series, The Art of Persia, filmed in Iran, for BBC Four and broadcast in June 2020. The Daily Telegraph said, “Ahmed has a gift for description.” The Times said “Ahmed was delighted to be there. Her enthusiasm was infectious.”

Samira’s radio documentaries include Laura Ingalls’ America, John Ruskin’s Eurythmic Girls, I Dressed Ziggy Stardust, HG Wells and the H Bomb, Riding Into Town (about her love of Westerns) and The Fundamentalist Queen (about the life of Oliver Cromwell's wife).

Samira writes regularly on culture and politics in newspapers and magazines including The Guardian, Financial Times, Radio Times, The New Statesman, The Mail on Sunday and The New Humanist. She has presented television coverage of the Proms on BBC4 and previously presented two series of the BBC1 ethics discussion programme, Sunday Morning Live. Her other BBC Radio credits include Radio 3's Free Thinking, Radio 4's Something Understood, PM, The World Tonight, Profile and Sunday. She was runner up for interview of the year at the Sandford St Martin awards 2016 for her Heart and Soul interview with Terry Waite.

Samira was previously a presenter and correspondent at Channel 4 News, where she won the Stonewall Broadcast of the Year award for her investigation into rape in South Africa and she made the Channel 4 documentary series "Islam Unveiled" about the status of Muslim women around the world.

She has been a reporter on and also presented Radio 4's Today Programme. On Newsnight, where she uncovered a major charity scandal, and was one of the first journalists to investigate the emergence of radical Islam at British universities. She also covered the OJ Simpson case as BBC's Los Angeles Correspondent.

Her natural competitive streak found an outlet when she won Celebrity Mastermind in 2010 and again in a Champion’s edition in 2019.

She speaks German and Hindi/Urdu.

Samira is a highly sought after conference chair, interviewer and professional moderator for cultural discussions at many major institutions including the British Film Institute, The British Museum, The Science Museum group and Royal Shakespeare Company. She’s also hosted events for the United Nations, and several UK government departments, including The Home Office, the Department for International Development and the Cabinet Office. She presented the Civil Service awards for 5 years.

She gives school talks and lectures regularly on journalism at a number of universities and hosts an annual student Question Time for 500 sixth formers at St Albans Cathedral.

Congratulations to Samira Ahmed whose BBC Four series The Art of Persia drew a huge number of viewers and some significant previews and reviews in national newspapers. The series was also supported by famous fan Michael Palin who wrote to Samira to praise the programmes.
read more
Samira Ahmed takes viewers on a remarkable journey to places rarely seen as she travels through Iran to tell the story of its complex and fascinating people, culture and history. Tune in on Monday 15th September at 9pm on BBC Four as she presents, Art of Persia.
read more
Wishing a massive congratulations to Samira Ahmed, who received Audio Presenter of the Year at the Broadcasting Press Guild Awards 2020, for her contributions to broadcasting this past year.
read more
Samira Ahmed appears on Celebrity Eggheads, taking on the general-knowledge champions, hoping to win a cash prize for her chosen charity. Wednesday 15th August at 6pm on BBC Two.
read more
A number of Knight Ayton clients will appear on your screens this evening covering the election from across the country.
read more
Congratulations to Harry Wallop and Samira Ahmed for two fantastic award nominations. Harry’s Dispatches: Secrets of Cadbury for Channel 4 has been shortlisted for the Wincott Video Journalism of the Year Award whilst Samira’s interview with Terry Waite on Out of the Silence for BBC World Service…
read more
Read more news...