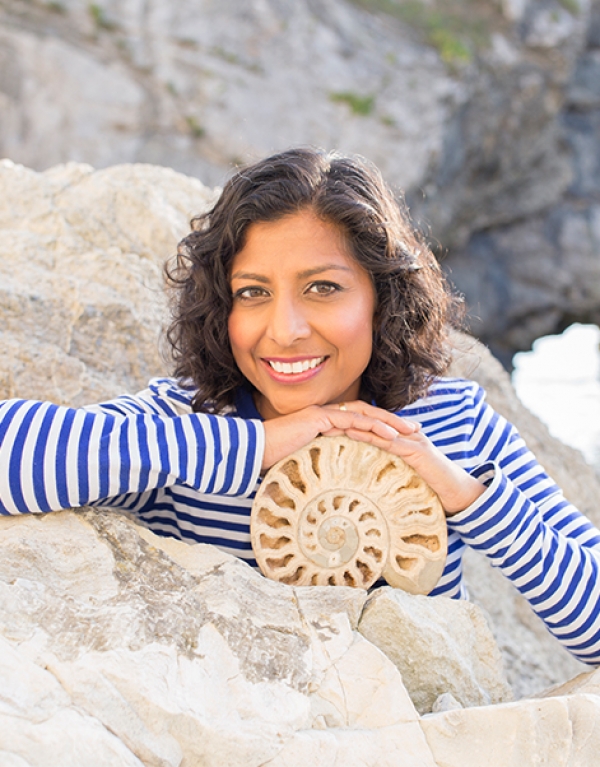 Dr Anjana Khatwa is an Earth Scientist specialising in bringing stories about the origins and formation of natural landscapes to life for a wide range of audiences.

Anjana appeared as a ‘super-contributor’ on BBC Four’s three-part series, Beach Live, where she was the show’s resident geologist expert, engaging audiences with her insight and knowledge about geology and fossils. She has also appeared on ITV’s This Morning and twice on ITV’s Love Your Weekend with Alan Titchmarsh.as well as My Cornwall with Fern Britton on Channel 5 and Villages by the Sea on BBC Two.

Anjana has appeared as a regular expert contributor on many natural history programmes such as BBC Two’s Fossil Detectives, The History Channel’s How the Earth was made, ITV1’s Treasures of Britain and PBS’s Treasures of the Earth.

She is an established learning professional and has a highly regarded international reputation as an expert on Earth Science and World Heritage education. She has published numerous papers on glacial geology, developed award winning teaching resources and won the Royal Geographical Society Geographical Award for excellence in educating the public about the Jurassic Coast.

Anjana has also been awarded the RH Worth Medal by the Geological Society, a Silver Commendation from the Geographical Association and won a National Diversity Awards 2020 as a Positive Role Model for Race, Faith and Religion.

She is Vice Chair of the Dorset Race Equality Council.

Born and bred in Slough, Anjana had a humble upbringing in an urban environment but grew to love the natural world through holidays to places such as Kenya, which is where her family originate from. Anjana has a BSc. in Earth Science and a Ph.D. in Geography where she specialised in glacial geology. Her diverse background and voice brings a unique perspective to her work.

An experienced and inspiring public speaker, Anjana delivers lectures and speeches that are witty, light and insightful. She is in particular demand for her thought provoking lectures about the role of women and minorities in science, careers in the geosciences and World Heritage conservation.

In November 2021 Anjana was longlisted for the Nan Shepherd Prize, a biennial literary prize for nature writing.

Anjana lives in Dorset with her partner and their three children. She enjoys an active lifestyle through running, swimming and also exploring the countryside of Dorset. A major pastime is spent filling her house with rocks and fossils she finds on the Jurassic Coast.