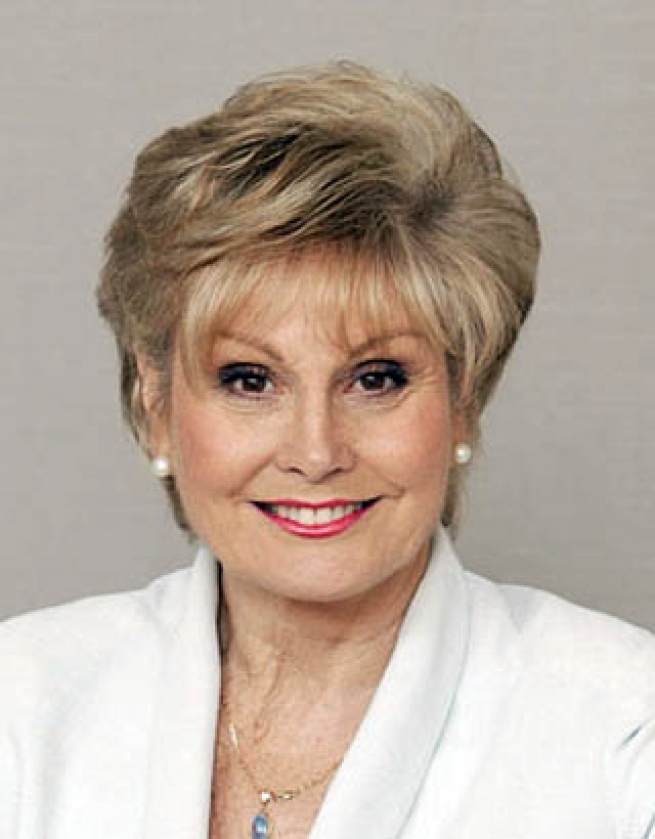 Angela Rippon has been a familiar face and voice in British broadcasting for over 50 years. The career of this award winning journalist has embraced an impressive variety of programmes on both radio and television for both Commercial and BBC stations in Britain, America and Australia.

The scope and quality of her work has been recognised by the Royal Television Society who entered her into their Hall of Fame in 1996. In 2002 she was voted European Woman of Achievement and in the Queen’s Birthday Honours of 2004 she was awarded an OBE in recognition of her services to Broadcasting, Charity and the Arts. Angela was appointed Commander of the Order of the British Empire (CBE) in the 2017 New Year Honours for services to dementia care in her role as development lead with Dementia Friendly Communities.

Trained as a journalist in her home town of Plymouth, Angela worked for both BBC Plymouth and the ITV station Westward Television before joining BBC National News in 1973. She was appointed the first woman journalist newsreader in l975 and made two memorable appearances in the Morecambe and Wise Christmas Shows.

Angela was a founder member of the commercial breakfast service TV-am in 1982 and in 1984 moved to America to work for CBS in Boston.

She has presented a wide variety of programmes from hard news and current affairs, to quiz shows and magazine programmes for both BBC and Commercial radio and television. Titles include Come Dancing; Top Gear, the Antiques Roadshow, Masterteam, Crufts Championship, Holiday Hit Squad and The Holiday Programme.

She currently presents BBC's Rip-Off Britain and reports for The One Show on BBC One reporting from various locations across the UK. She also lends her voice as ‘the Wall’ on the hit BBC One game show The Wall, with Danny Dyer – which has been commissioned for a second series..

In 2017, Angela championed Alexander Flemings discovery of antibiotics as Britain's Greatest Invention as she battled 7 celebrities live on BBC Two.

She remains committed to a number of charities, including the British Red Cross of which she is Vice President. Angela travelled to Kenya for Comic Relief and was part of the Famous, Rich and in the Slums BBC One programme.

Angela has written 14 books, the most recent being Fabulous at Fifty and Beyond.

Angela also chairs conferences and seminars and is a highly skilled conference facilitator and after dinner speaker. She has a wealth of experience hosting events and award ceremonies, both at home and abroad.

2020 is off to flying start over here at Knight Ayton Management, with plenty of familiar faces hitting our screens. Lucrezia Millarini is swapping the ITV news room for the skating rink on ITV’s Dancing On Ice, while Martin Lewis’s ratings continue to soar with The Martin Lewis Money Show also on…
read more
Rip Off Britain: Holidays is back! Join Angela Rippon and Julia Somerville as they investigate into disastrous holidays and travel stories – you can catch them offering up consumer advice to ripped off holidaymakers on weekdays at 9.15am on BBC One.
read more
Angela Rippon wowed audiences with her appearance on Strictly Come Dancing on Saturday 7th December. Reading out the T’s and C’s, she received an outpouring of adoration from viewers on Twitter: “I think Angela Rippon should be an extra Strictly presenter, she’s great!” “Hello?? Is that the…
read more
Catch Angela Rippon on Pointless Celebrities on BBC One at 5.30pm on Saturday 23 November. She’ll be competing against other celebs, trying to find the obscure answers.
read more
The Wall will be hitting our screens in 2020 for a second series, with Angela Rippon returning as the voice of the Wall - “I am so looking forward to another series being 'the voice' of The Wall. What a great opportunity for even more viewers to take on the challenge of The Wall and potentiality…
read more
Trust Morecambe and Wise, featuring Angela Rippon, hits our screens on Friday 8th November at 8pm on UKTV: GOLD. A 4 episode series on the legendary comedy duo, this is a programme not to be missed.
read more
Read more news...